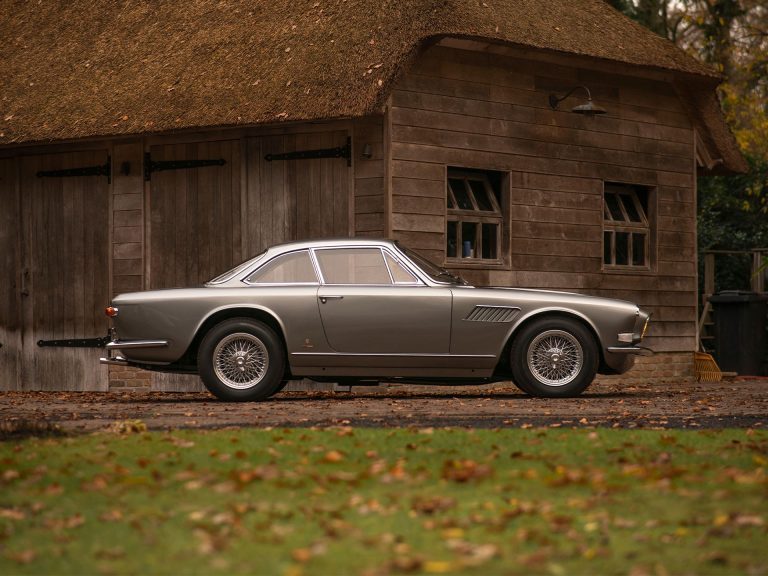 What if perfection has no limit? And the same goes for the budget? Then you’ll get a brilliantly restored 1967 Maserati Sebring 3.7 Series II. The total investment for all the work and effort that was put into this project has a price tag of no less than 450,000 euros. Original documentation and invoices are included. So for the next owner, the Sebring Series II is a total bargain. Only 246 others of them were built, but we all know this must be (one of) the best out there. And it’s available.

The Maserati Sebring – during the introduction back in 1962 better known as 3500 GTiS, was marketed next to the 3500 Gran Turismo series. Maserati’s 1957 win at the 12 Hours of Sebring inspired the brand to rename the model in 1965. From that moment, the factory also offered a more powerful 3.7 engine. This Series II has such an upgrade too and started its career in Italy, followed by America, until his former owner found the barn find in 2005. The Maserati Sebring crossed the ocean for the second time and began its second life in Holland. The restoration process took 2 years. Bodywork, engine, transmission; absolutely everything was taken care of. Total costs: 450,000 euros… Yes, it’s that good.

It was the Maserati 3500 GT that set the base for the Sebring, but they are really two completely different cars. The 2nd series can be recognized by its modified headlight units, bumpers and a golden logo at the front. On the sides, the cooling slots were moved further upwards and he rear light units got a horizontal design. But above all, the Maserati Sebring has an exceptionally elegant appearance, thanks to famous designer Giovanni Michelotti who was working at Vignale at that time. Bodywork and lacquer are truly immaculate, so you can enjoy all the beauty completely carefree.

The superior design of this stylish GT has a traditional 2+2 setup. However, open the door of the Sebring and you’ll be blown away by pure splendor. The design is timeless, the overall condition is magnificent and much attention has been paid to details. By the factory and the restorer as well. This 54 year old trident is as good as new! And is full of character. Red upholstery, chrome accents, an original Becker radio and classic wood finish on the steering wheel + gear shift; it doesn’t get any better than this!

Maserati has built 446 Sebring’s in total, of which 247 Series II. Even fewer have a more powerful 3.7 liter 6-cylinder in-line engine under the hood with 245 hp – 10 extra compared to the standard version. The top speed of 240 km/h is 5 km/h higher too. But more importantly though, is the comfort and sound of our classic trident. Yes, this dazzlingly beautiful Maserati Sebring is worth every penny that was spent on it.