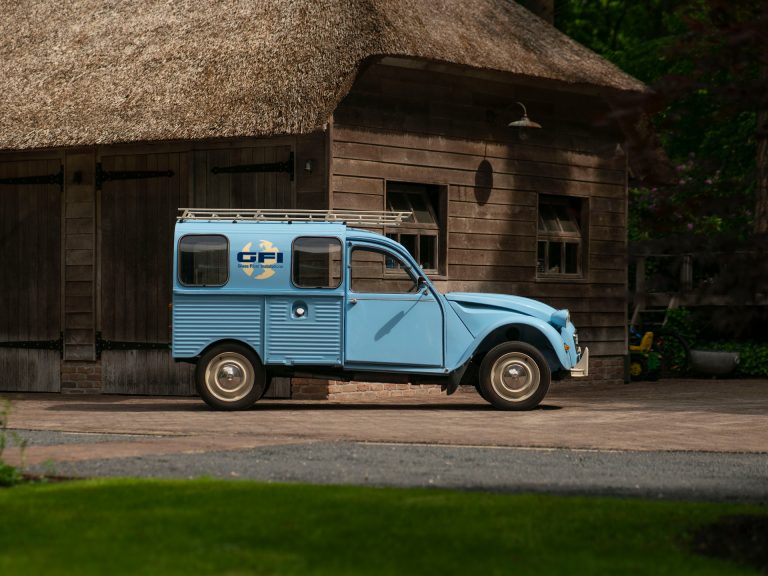 Some unique cars are ultra-rare, while others are extremely much built. The Citroën 2CV is a one of a kind car, which was produced over 5 million times. We’re not just talking about a classic here. It’s a true icon. A legend. This is pure cult. And the Fourgonnette version even goes a step further. Attention entrepreneurs! When the Citroën 2CV Fourgonnette says “250”, it can move that much kilos. After half a century, our Frenchman isn’t 100% immaculate, but it has 1000% character and solid technique as well. So who could use a marketing boost for the company?

History
Citroën initially developed the 2CV for use in the rough French countryside. The original prototype dates from the second half of the 1930s. It wasn’t until 1948 that Citroën unveiled a heavily modified version of the farmer’s land car, having such a soft suspension that eggs wouldn’t crack while driving in tough terrain. One year later, the 2CV went into production and became an unprecedented success. In particular, the combination of peculiarity, affordability and unparalleled comfort resulted in extremely long delivery times. In 1990, Citroën had sold over 5 million 2CV’s, including 1.25 million Fourgonnette versions between 1951 and 1979. The commercial vehicle was mainly used for freight transport. For years, the Dutch roadside assistance service drove versions that could take 350 kg of cargo. This earlier version goes up to 250 kg payload; enough to go crazy with marketing tools!

Design
Let’s face it: the unique styling, typical French character and charming design make the Citroën 2CV Fourgonnette a crowd favorite at local food truck festivals. Use it as a mobile barista or sell authentic clothing and go door to door, like a milkman collecting his bottles. Apart from the rectangular construction at the back, the Fourgonnette commercial vehicle largely corresponds to the passenger version. This means that the narrow nose, wide curves in the front screens and round headlamps ‘on legs’ are part of the characteristic Italian design too. That’s right: one of the most famous French cars was designed by Flaminio Bertoni, also known for the Citroën ID/DS and Traction Avant.

Technique
Running 50 years and still going strong. The technique is tougher than an old French baguette. Fold up the windows and listen to how the air-cooled 2-cylinder boxer engine is pushing its few horses to the front axle and ultimately the road. Sounds pretty solid to us! Which fan, classic car collector or creative entrepreneur suddenly has a great idea? We can guarantee: working with a Citroën 2CV Fourgonnette always pays off! You know where to find us…